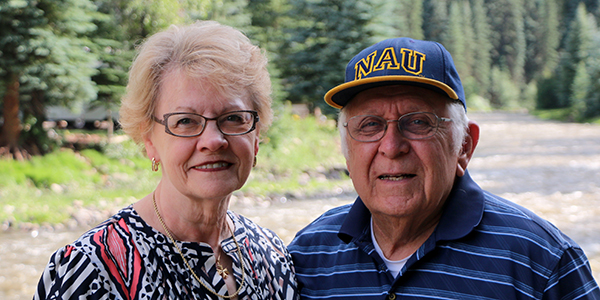 "When the realization of the finite nature of life became self-evident, the legacy we will leave, in our brief passage on this Earth, becomes increasingly significant."

After exciting and rewarding professional careers at NAU, Gus and Karen Cotera sought to enhance their legacy, in perpetuity, by funding Professorships in Geology and Scholarships for Undergraduate Students in Education.

Dr. Augustus Santiago Cotera was the first member of his family to graduate from High School and College. He earned the B.S., M.A., and Ph.D. from the University of Texas at Austin. After a brief employment with Exxon, he entered a lifetime of teaching with the passionate pursuit of helping students achieve their professional goals.

Similarly, Dr. Karen Wise Cotera was also the first member of her family to graduate from college. She earned an Associate of Arts degree, a B.S. in Elementary Education, a Masters in Library Science, a Masters in Educational Administration, and finally the Ed.D. in Curriculum and Instruction at NAU Flagstaff. The goal of her career has been to shape the lives of students who aspire to become public school teachers.

Gus came to NAU in 1967 where he taught Geology and chaired the Department. In 1980, he left the classroom to work with then NAU President, Eugene M. Hughes as Assistant to the President. In 1987, he was chosen to be the Executive Director of NAU's first branch campus in Yuma. Karen joined right in and established the Department of Education. Together, they were a "dynamic duo" shaping the foundation of the NAU Yuma campus.

As they began to make plans for the final use of the Cotera Estate, it was natural that their attention turned to furthering the legacy they started with their hard work and dedication to NAU. Working with the Gift Planning staff at the NAU Foundation, they completed detailed instructions with the NAU Foundation on exactly how they wanted their estate gifts to be used.

"We have made new friends with the dedicated staff of the NAU Foundation through this process, resulting in a peace of mind that comes from having plans in place to be enacted after our lifetimes. We are now free to enjoy our homes in Virginia, Colorado, and Southern Spain more fully knowing that we will continue to make a difference in the lives of future NAU students."